Increased revenue by 2,554% in 24 months. From one service city to serving 6 surrounding states.

Half The Marketing Spend 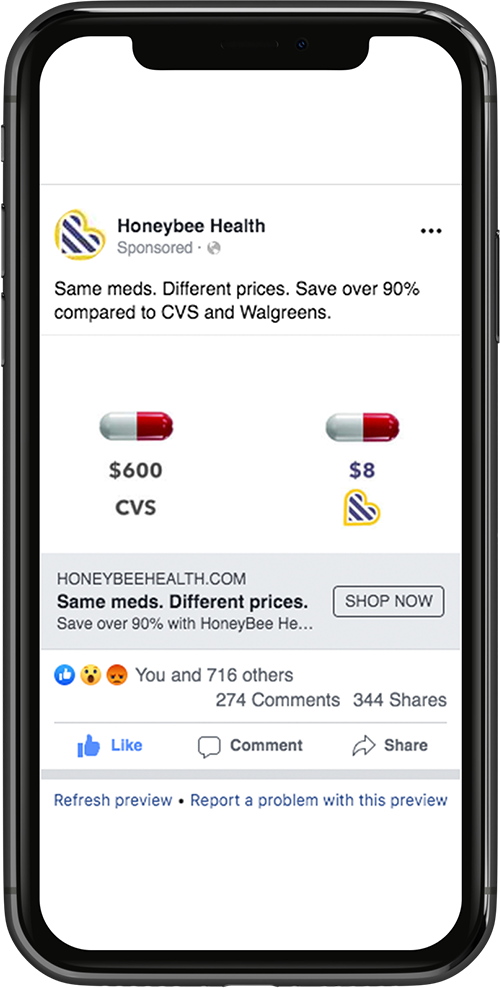 The pharmacy space is both crowded and competitive because of big companies like CVS, Walgreens, Duane Reed and much more. The Honeybee team has top-notch customer service and a great product, but needed Pivot CMO’s help to boost revenue, traffic, and awareness profitably. Because they pass savings on to their customer, Honeybee’s drugs are lower AOV and lower margin than most competitors posing an even bigger challenge.

We decided to focus our marketing efforts on Facebook and Google Ads. For Facebook Ads we focused on the fact that our client offered significantly cheaper medications than traditional pharmacies like CVS or Walgreens.

A Top of the Funnel campaign with bid caps was used as a miner for different audiences – we launched 20 ad sets with a mix of Interest and Segmented Audience Data. Limiting the bid campaigns allowed us to figure out which audiences were working while still maintaining efficiency.

We then moved any audiences that were performing to a scale campaign, auto bidding on lowest cost with Campaign Budget Optimization. This allowed us to capture a 5x Return On Ad Spend on a one-year LTV on average. For some drugs, we have a first-year Return On Ad Spend of up to 11x – 12x. This is important because pharmacy customers typically stay with a pharmacy for 3 – 5 years, this is extremely profitable for the company.

For Google Ads, we took drugs with high AOVs and the highest margins and compared the delta between our client’s prices and their competitors. We tested with the 20 most competitive drugs, each drug with its own daily budget, and quickly culled the list down to around 5 super profitable drugs, then scaled up to spending around $2,000/day. The first charge ROAS was 2.5X on drugs that would rebill for 1 year, placing 1-year return on ad spend at around 11x.

Experience Working With A Fractional CMO

1 Hour of Research Followed by 1 Hour of Consulting